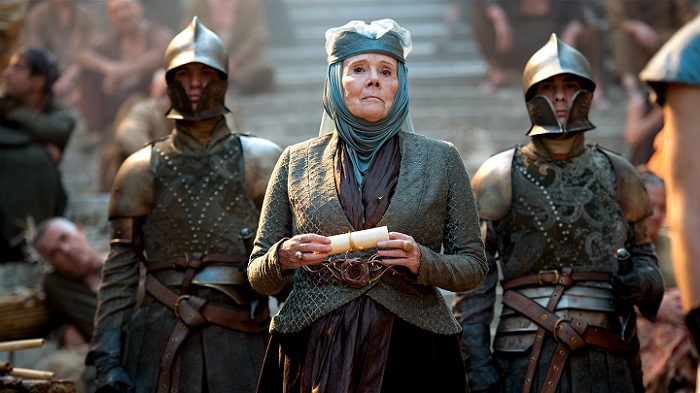 26 Apr Game of Thrones: Elderly Characters are the Secrets

“When you play the Game of Thrones, you win or you die.” – Cersei Lannister

What better way to describe a series that’s been on everyone’s mind right from its inception? After seven mammoth seasons, countless deaths, and a wait of two long years—Winter is Finally Here! Everyone’s been waiting for the penultimate season of Game of Thrones with bated breath. And what makes it a crowd favorite are the characters, especially its elderly characters who’ve in some way or the other made the show what it is today.

Let’s face it, if there was any character who gave Cersei some tough competition, then it has to be the High Sparrow. A man on a mission, the High Sparrow forced Cersei into having the walk of shame. There couldn’t be a better actor than 71-year-old Jonathan Pryce to portray such a complex character.

Calculative and cunning—Tywin Lannister is a character that you would love to hate and definitely wouldn’t want to be in his bad books. His ruthlessness and conniving attitude are what make the Lannisters one of the most formidable forces in the whole of Game of Thrones.

You have to agree that in the initial few seasons it was Olenna Tyrell who was dominating this game and had everyone at the snap of her finger. Her ploys and schemes made her a force to be reckoned with. She has managed to dominate every time she’s been on screen.

Whoever has watched Game of Thrones can vouch for the fact that handling Cersei and being at the hand of the queen isn’t an easy task, but Qyburn has always held his own in front of her. Played by the 67-year-old Anton Lesser, Qyburn is conniving, talented, and a key member of the Lannister house.

No one can look at weddings on Game of Thrones in a positive way, thanks to Walder Frey. Everyone remembers the Red Wedding that also became the reason for the fall of House Stark. This was orchestrated by Walder Frey, one of the most hated elderly characters on GOT. This character was portrayed effortlessly by the brilliant David Bradley.

One of the silent yet most sincere characters in Game of Thrones—Aemon Targaryen is a bundle of knowledge. When Jon Snow was confused and in his most vulnerable state, it was Aemon who helped him make the right decisions.

When it comes to these elderly characters—you may love them, you may hate them, but you definitely cannot ignore them. The central characters might be in the race for the throne, but these older characters and their contribution to the whole plot line are what makes Game of Thrones a series to watch out for.