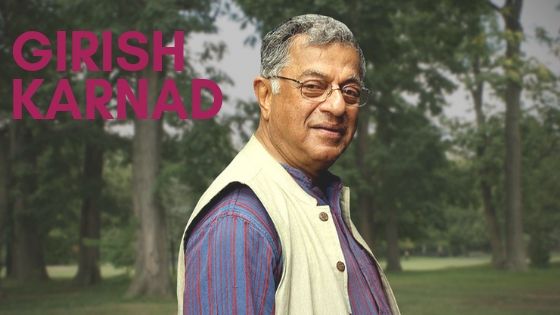 09 Jul Girish Karnad: An Inspiration to the Society

Girish Karnad was an intellectual who left his mark in various fields like performance art, theatre, and literature. He is a renowned playwright, director, and actor who was born in the Bombay Presidency in the year 1938. His father (doctor) and mother (nurse), who was a widow had to wait for 5 years to get married as society during those times was regressive and against widow remarriage.

His parents moved to Sivisi, a charming little town in Karnataka during his childhood. The town often faced electricity cut-offs. The only entertainment available was played by traveling theatre groups and occasional movies.

Girish Karnad watched Yakshagana, learned stories from Puranas, and was fond of theatre since his boyhood days. This exposure assisted him to contribute to the performing arts later in life.

He completed his graduation with a Bachelor of Arts in Mathematics and Statistics from Karnataka Arts College. Later, he received a Rhodes Scholarship and went to Oxford University. There he earned his Master of Arts degree in political science, economics, and political studies.

His play ‘Yayati’ was published during this period. Girish Karnad would have written his plays in English and gained much more popularity, but he preferred to write them in his native Kannada language and translate them into English for audiences abroad. It shows his immense love and attachment to his roots and country.

On returning to India, Girish Karnad worked for seven years at Oxford University Press in Chennai before turning into a full-time writer. His association with the well-known theatre group The Madras Players was a catalyst in introducing him to the world of performing arts. His art did not stop at theatres, and he turned toward the cinema as an actor and director.

He won many praises and hearts with his artistry in the world of cinema. In spite of being established, playwright and director, Shoma. A. Chatterji, a film critic, remember him being as happy as a child and thrilled when his film Cheluvi was featured in Delhi. These pure emotions of joy again were proof of his dedication and love toward art and cinema.

Another instance of his tremendous love for his work was his role in the film Ananda Bhairavi, where he portrayed the role of a dance teacher teaching Kuchipudi. This role was extraordinary as it demanded Girish Karnad to learn the dance form of Kuchipudi. Furthermore, he had to fight with traditional Kuchipudi practitioners to train and cast a girl because Kuchipudi banned girls from learning this form of dance. Although the film did not receive any commercial success. But it was the result of grit and perseverance for delivering flawless performance on the part of Girish Karnad.

Apart from being academia, artist, and writer Girish Karnad was also a social activist who indulged in socio-political matters. He was a prominent voice against right-wing ideology and Hindutva. He was a prominent personality to raise his voice for the murders of Kalburgi, Gauri Lankesh, and others.

During the first memorial death anniversary of Gauri Lankesh, he was seen wearing a placard that said, “Me Too Urban Naxal” in spite of him being ill and having a tube in his nose. He stood for what he believed till his last breath in spite of threats and warnings by a Hindu fundamentalists.

Girish Karnad died due to multiple organ failure at the age of 81 on 10 June 2019. His notable work in the field of cinema and literature and his courage to fight for his beliefs will always continue to influence and inspire coming generations for the years to come.