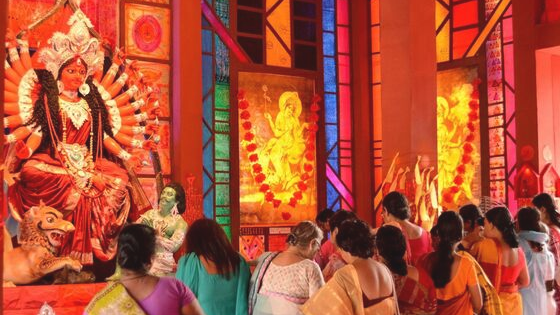 03 Oct Dos and Don’ts of Pandal Hopping for Seniors

Posted at 09:51h in Lifestyle by Prasun Tribeca

Seasons come and go. Some people love spring, while others love the winter and some even love the summer. For people living in Kolkata, one particular season will always be close to their hearts and without any doubt, happens to be their favorite. It is none other than the autumn season. This is the season, when Durga Puja, the biggest festival of Bengalis, is celebrated for 10 days. It starts from the Mahalaya and ends on Vijaya Dashami.

Durga Puja is more than just a religious festival. The energy level among common people remains at its peak, with millions pouring out into the streets to celebrate the annual extravaganza. People throng the pandals to soak in the atmosphere of Durga Puja and get mesmerized by the decoration, lighting, and rituals associated with it.

Now, on one hand, where pandal hopping involves a lot of fun, the crowds and heat can dampen the spirits of worshipers. This is where one needs to be aware of certain Dos and Don’ts, which can make pandal hopping a thoroughly enjoyable as well as a comfortable experience.

Let us discuss the Dos and Don’ts and also talk about the care that one needs to take while visiting pandals with one’s parents and senior people around:

Make Sure to Wear Comfortable Footwear:

The very first thing that one must look to do before going out for pandal hopping is to wear footwear, which provides comfort. Pandal hopping involves a lot of walking. Moreover one requires to stand in endless queues outside famous Puja Pandals for almost an hour, before going inside, aches and swollen feet happen to be the most common complaints. So, to walk long distances comfortably and also allow yourself the comfort to stand in queues for hours, wear footwear like flats with really soft, breathable soles. Sneakers can be ideal under these circumstances.

Keep a Refillable Drinking Water Bottle With You:

Do carry a refillable drinking water bottle with you while visiting pandals during Durga Puja. You could come across dispensers of drinking water, which are often set up by some local organizers. Even if you are worried about the quality of water offered over there, you can keep some purifying tablets with you.

Any occasion that calls for celebration, can allow people to wear fashionable clothes. The same thing applies to pandal hopping during Durga Puja as well but in reality, wearing clothes made of anything material other than cotton can turn out to be a disaster. In Kolkata, even during October, the weather is far from being comfortable. Add to it, the discomfort caused by Kolkata’s humidity. So, it is advisable to stay away from moisture-wicking fabrics.

It is extremely important to know the roadmap appropriately before you leave for pandal hopping. It is better to mark all the pandals on the Google Map on one’s phone so that you do not miss the pandals while lying in the same zone.

Be Cautious About the Well-Being of Parents and Other Seniors:

There is always a craze among people to visit popular Puja Pandals of South Kolkata, which include the likes of Ekdalia Evergreen, Singhi Park, Jodhpur Park, Babubagan, Mudiali, Selimpur, 66 Pally, etc. Every year, footfall in these pandals always remains at its peak. So, it is very important to hold the hands of Aged Parents and other Senior People, so that they always remain within your sight.

Make Your Parents and Seniors Aware of Police Booths:

It is important to let your aged parents and other seniors know about Police Booths near Puja Pandals. There is every possibility that pandal hopping can take a toll on senior people and can tire them. Then they might look for a resting place, where they can sit for some time and relax. It is best not to leave them alone over there but in case, you have to, let them know about the Police Booths present in different Puja Pandals, where they can go and try to get in touch with you and not panic.

While pandal hopping, a situation might arise, where people might get restless in the long queue and forcefully try and enter the pandal. In the process of doing so, they could very well damage the barricades. Those situations could be troublesome for seniors and our parents, as they might stumble upon and injure themselves after failing to keep their balance. This is where Band-Aid and Cotton can come in handy and act as a first-aid treatment for them.

There are certain things, which one must not do while making plans and also during pandal hopping in Durga Puja. They include:

Now that you know certain dos and don’ts to follow while visiting pandals, go ahead and start pandal hopping. Take care of your parents and other seniors accompanying you in pandal hopping and enjoy Puja.