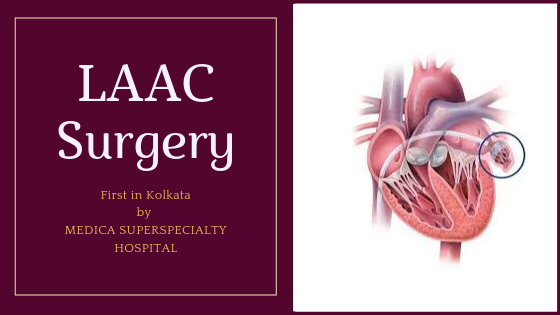 Posted at 10:43h in Lifestyle by Prasun Tribeca

A path-breaker surgery in a super-specialty hospital in Kolkata is the new talk of the town for a few days now. But are you wondering what the surgery is all about? It’s commonly known as LAAC, Left Atrial Appendage Closure.

Previously, LAAC Surgery was unheard of in our country but now this surgery has been conducted for the first time at Medica Superspeciality Hospital in Kolkata.

LAAC is a minimally invasive procedure, mainly used for reducing the risk of stroke that comes up as a result of atrial fibrillation, a common arrhythmia, where the heartbeat is not rhythmic. This procedure seals a small part of the heart, from where the blood clots usually form. When the heart beats out of its actual rhythm, it causes the upper chambers of the heart to shake rapidly. This rapid movement of one’s heart’s upper chambers put individuals at an increased amount of risk for forming blood clots, which can easily travel up to the brain and result in a stroke

Dr. Dilip Kumar, a cardiologist with more than 15 years of experience, performed this LAAC surgery on Mrs. Anubha Ghosh, just 3 weeks back. The Appendage Closure device has been placed in her heart through this surgery.

Mrs. Ghosh was an Arrhythmia patient and used to suffer from palpitations in her heart. The palpitations occurred out of going up and down the stairs and also whenever she used to get tensed about something. The patient also had her pacemaker replaced on the day of her LAAC Surgery.

In Medica, LAAC Surgery was conducted along with pacemaker replacement because her problem of frequent palpitations would not have got resolved only by replacing the pacemaker. Thus, both had to be done simultaneously.

Before undergoing this procedure, Mrs. Ghosh had undergone several tests over the last two and a half months. Being a member of the TriBeCa Care Eldercare Family, her care manager (Payel) assisted her with all the check-ups and diagnostic tests for 2.5 months before the surgery.

Earlier, only people from developed countries like America and others had the luxury of undergoing this LAAC surgery. But now Kolkata can be proud of the fact that this surgery has been successfully conducted in Medica Superspeciality Hospital. This goes to show the level of advancement that has come through in the medical field.

This acts as a testimony to the kind of treatment, which patients can expect to receive from now on and thus believe that they can fully recover from these kinds of heart problems in the future.