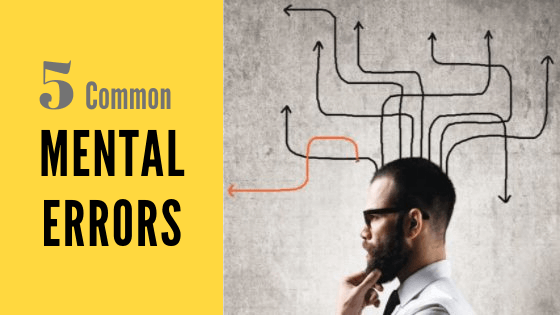 Posted at 12:34h in Mental Health by admin

They say that a rational mind doesn’t work under compulsion. And it doesn’t subordinate its grasp of reality to anyone’s orders. If you think you’re a rational person who always makes rational decisions, we say think again. We’re all irrational beings and that’s what researchers have to say.

While researchers used to believe that people made logical, well-thought decisions, they’ve been proved wrong over the years. Psychologists have unleashed certain behavioral patterns that they deem as ‘mental errors. This mental error influences our thinking and decisions.

Mental errors are common when we have to make emotional or irrational choices. This, in turn, also affects any good decision that we’re about to make.

Delving deep into the 5 mental errors as highlighted by psychologists:

An individual’s strong urge to avoid losses is a big sign of loss aversion. To avoid being hurt by losses, people prefer not to experience loss at all, so they avoid any kind of huge overturns. For instance, if you get Rs. 10,000 into your account, you feel good. But if you have to give Rs. 10,000 or you lose the same amount of money, you feel a dramatic decrease in your satisfaction levels. You don’t make any good decisions to avoid further losses.

Another common mental error that our brain makes is the availability heuristic. This majorly happens when the mind cooks up an example and believes it to be the most important. For instance, many people believe that the rate of child abuse, rape, and sexual assault has reduced. But when they face the statistics, it shocks them often.

Confirmation bias is simply where our mind only tends to believe information that matches our belief system. Our mind always rejects anything that’s contradicting. Even when you have raw facts or proof, you tend to reject them since your mind is already conditioned to believe what it wants to. This overturns any good decision that you make.

A powerful neurolinguistic programming technique, you usually use anchoring when you want to persuade people to do what you want to do. For this, you present an anchor and transform it into the main point of discussion. Often marketers use this technique to make their offers tempting in a way that you develop the urge to buy their offerings.

Considered to be a revolutionary concept in itself, these common mental errors play a big role in how you function in your daily life, and your day-to-day interactions, and they also impact any good decision that you make. You cannot completely curb them, but you can be self-aware and stop yourself from making any of these errors.