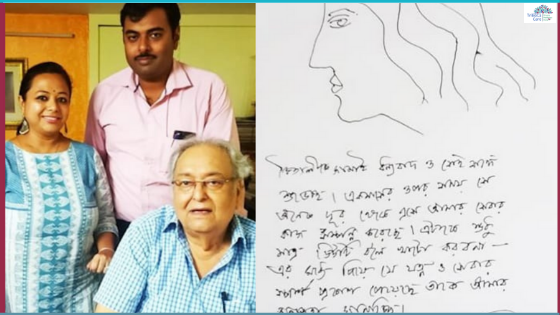 There are very few actors in this world who live a solid impression. Their footprints are engraved so deeply in the time frame that none other can surpass it. Such an example of an extraordinary human being Late Soumitra Chatterjee was.

What can one speak about this screen legend, which has not been told before? Saying he was an unconventional actor would not be enough. The man who started his celluloid journey with “Apur Sansar” went on to become a star beyond the silver screen.

Like many actors who contribute their success to filmmakers, Soumitra Chatterjee’s journey into the films is largely due to Satyajit Ray. The filmmaker was the one who bought Chatterjee into the limelight. Such was the association of the actor with the genius director that he starred in 14 out of 29 films.

Soumitra Chatterjee’s celluloid journey indeed began with “Apur Sansar”, and with time he became the quintessential “Bhadralok” of Bengali Cinema. But Chatterjee’s contributions are not limited to the screen.

He was a person with many parts.

From being a poet, essayist, thespian, writer, playwright, and painter, Soumitra Chatterjee was many people rolled into one. He was one such Bengali actor who was a part of the world cinema because of his class.

Chatterjee even wrote many plays, prose, poetry, and translations. He once stated that life without theatre is unimaginable and thus was involved in it deeply. It was this love for contemporary social concerns that made him unhappy with the way Bengali theatre turned in the 60’s.

His discontent led him to write and direct plays even at the peak of his career. Soumitra Chatterjee also had a voracious appetite for reading. He even has the credit of publishing a book of poems and also co-edited the journal “Ekshan”. The journal published ace director “Satyajit Ray’s” screenplay for the general public.

There are few Indian actors today who can rival such a literary graph. However, apart from his screen image, Soumitra Chatterjee lived a life of a normal human being. He would greet visitors and accept guests with a lungi which showcased his regular life.

Apart from playing a diverse range of characters, Soumitra Chatterjee was also a painter par excellence. An art exhibition held in 2013 displayed his sketches, doodles, watercolours which revealed another side of his personality.

In short, Soumitra Chatterjee is one of those few actors who could easily strike a balance between life and cinema.

Tribeca Care is Proud To Serve A Legend Like Him

Tribeca Care is one of the pioneer eldercare platforms operating in Kolkata. The organization had a chance to serve the screen icon “Soumitra Chatterjee”.

In 2019, when he had some surgery, Tribeca looked after him. One fine evening when we went to see him, he was delighted to meet us. Happy with the home care services, he wrote something on a piece of paper instantly and handed it over to us.

“I want to thank Chaitali with all my heart and give her my regards. Over months, she took care of me. The care and love showered upon me was not only a part of duty but was out of love. It reflected a lot about her sense of utmost care and the human touch she shared with me. I thank her with all my heart. Thank you Tribeca Care!”

Although his death is like a void that can never be filled again, Tribeca Care is proud to serve a legend like him.

A handful of actors can move beyond the screen and make a place in the hearts of the viewers. Soumitra Chatterjee was one of them. We at Tribeca Care are immensely proud to have associated with him. His name will be remembered forever as long as the silver screen continues to light up.