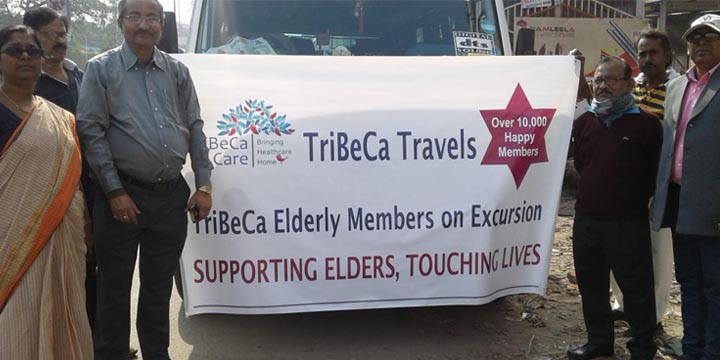 TriBeCa Care has been giving excellent elder care service – both medical care and non-medical, to members for the last five years and has been recognized as one of India’s leading elder care companies.

However, over the years as our members increased in numbers, we as a team felt the need for something more than just physical care. Taking care of mental health is as important as physical health.

We had already initiated tea parties on a small scale for our members, which they enjoyed thoroughly.

The small-scale tea parties made us realize that it is important for mental health for the elderly members to interact with those similar to them and to indulge in physical activity that they would not have ventured into otherwise.

We needed to work out a solution wherein like-minded elderly people can meet each other and can spend time interacting. This has been proven to reduce loneliness and depression in the elderly.

One of the options we had already thought of was arranging elder-friendly travel options. However, we had never taken it forward for various reasons.

As a test case, we opted for a short trip. Our senior care managers, Hena Roychowdhury and Santosh Bhuimali took an active interest and planned an overnight trip to MAYAPUR. 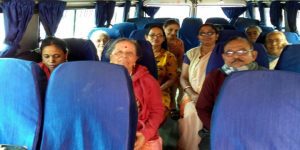 12th November around 11 am, the luxury coach started from Rathtala with twelve Members on board. The departure got delayed because the Care Managers were handling a hospitalization case early morning. Our members understood the situation without any annoyance. With songs and laughter, we started our journey. Breakfast was served on the bus, sandwiches, and sweets. We stopped at a roadside Tea stall for the tea break. After half an hour we started for our destination.

As luck would have it, we got stuck at Ranaghat. There was a bridge on the highway and a truck carrying hays caught fire in the middle of the bridge. The fire brigade and police were there to settle the issue. It took more than an hour to leave the place.

Meanwhile, our Members were busy knowing each other and they were busy chatting and singing. There was no sign of impatience. A wonderful group of like-minded ladies.

We missed the lunch at ISKON because of the delay. So we decided to stop at Krishnanagar for lunch. We stopped at a Restaurant, named Annapurna around 3 pm. A nice place, they served only various kinds of Thalis. Our guests placed their orders, and within 10 minutes lunch was served. We all were famished. Lunch was over within 20 minutes. We also bought some sweets for the evening.

The sun was setting in, by the time we reached ISKON. The whole ambiance was cool and serene.

After finishing all formalities, we started settling the members in their allotted rooms in the guest house GADA BHAWAN. All the rooms were neat and clean. The ladies were behaving like school children out on an excursion. It was a pleasure to see their happiness.

They all got ready for the evening ARTI. By 6 pm the Arti time, we all gathered at the Temple. Shoes are not allowed so we all walked bare feet in that cold but they did not mind at all. The Temple was at a distance from the Guest House. In spite of their physical discomfort, they proceeded toward the temple with child-like energy.

We spent more than an hour in the temple watching the Arti and thereafter, songs and dances by the Devotees. Some of us joined them.

Around 8 pm we got back to our rooms The ladies needed little rest before dinner. The dinner time is 9 pm. We almost missed it because we reached the dining hall after nine. ISKON maintains strict rules in all their activities. Anyway, they were kind enough to let us enter the dining hall through a back door. The dinner was simple, Rice, two kinds of veg curries, dal and sweets. It was light and tasty.

After dinner we went out for a walk. . There was a chill in the air. We got to our rooms after half an hour and retired for the day.

The morning started with disappointment because tea/coffee is not allowed in ISKON. I took the initiative and smuggled in tea and biscuits from a tea stall outside. Their happiness to see the hot beverage was a sight. We all had tea in one room. After the morning adda, they started getting ready for the day.

Around 9 am we went to the small café in Gada Bhawan where a variety of breakfast was ready for the guests. Dosa, Idli, Parathas, and Pizzas were all we had by choice.

After breakfast, we all went sightseeing outside the ISKON campus. Amongst a few were Chaitanya Dev’s birthplace and a few important temples. We hired Totos and our overgrown children loved the toto rides.

We returned to ISKON around 12.30 pm. 1’o clock is their lunchtime. We ordered VIP lunch, so we went to a different dining room. Where the setting is formal and luxurious. The lunch was superb and delicious. It was a 12-course lunch. The devotees were served with utmost care.

After lunch, we hardly had time so we started preparing for departure. We started around 3 pm. On the return journey, our ladies fell into afternoon siesta after that sumptuous lunch. We took a tea break mid-way. We reached Kolkata around 7 pm.

For those elderly members confined within the four walls, the outing was like setting a bird free from the cage. The long walks bare feet, the general feeling of camaraderie, friendship, and joy in sharing an environment with new friends who understand each other, the arti, the food, everything brought a few strangers together in a way that was previously unseen by us.

They were all genuinely happy, and their smiles convinced us that this was indeed a move in the right direction.
We hope to continue with elder travel and help more seniors in networking, interacting, and combating depression and loneliness, and we look forward to the smiles on their faces. 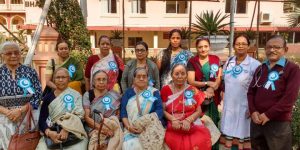