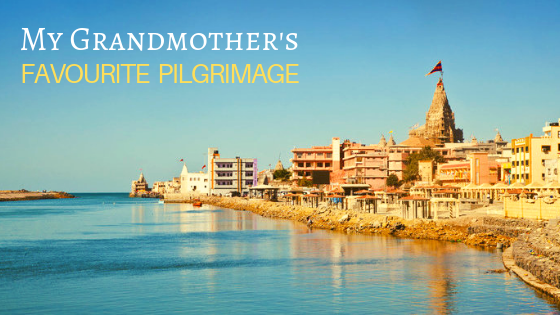 My grandmother was born in a quaint little village in the lap of the Sahyadri mountains. She was an ardent devotee of Lord Krishna who grew up listening to ‘Bhajans’ and Bhupalis’. One would always find her singing these devotional hymns as she went about her chores. Her devotion to Lord Krishna took her on pilgrimages to Dwarka.

Dwarka is a holy city that is located in the state of Gujarat on the banks of the Gomati river. This town has immense importance in Hindu mythology and thus is an important pilgrimage destination. It is considered to be the capital of the kingdom of Dwarka which was ruled by Lord Krishna in ancient times.

Furthermore, it is also one of the ‘Chardham’ and one of the seven most ancient Hindu pilgrimages in the country.

Dwarkadish temple is also known as ‘Jagat Mandir’. It is approximately 2500 years old and is believed to be constructed by the grandson of Lord Krishna. The architecture of the temple consists of a 5-story steeple which is supported by 72 pillars. The steeple of the temple is beautifully carved with intricate details and stands in contrast with plain interiors. The four-armed Vishnu idol, which is also known as Trivikarma, is crafted in black stone. The beauty of the idol is mesmerizing with a sight to behold. There are other shrines dedicated to deities like Laxmi and Saraswati on the temple premises.

Gomati ghat is located where the river Gomati mingles peacefully with the Arabian sea.  One has to descend a flight of 56 steps from the ‘Swarg Dwar’ of Dwakadhish temple to reach Gomati ghat. Taking a dip in the water of Gomati Kund which is situated close by is believed to clean you from mortal sins. You can take a boat ride to admire the ghat dotted with shrines of many small temples and a panoramic view of the holy city.

Dwarka Beach is stretched along the Arabian Sea in Jamnagar, Gujrat. Jamnagar is also a jetty that offers boat rides to tourists. These water rides let you explore the unique fauna of the region.  Dolphins, sea urchins, starfish, octopuses, turtles, and many other amphibians can be sighted here. The reddish-orange beach is in the vicinity of Beyt Dwarka which is an island full of various temples off the shore of the city.

Besides temples, a lighthouse situated at a distance of three and a half kilometers away from the central city is another major tourist attraction. This lighthouse is open for visitors from 4 pm to 6 pm. The lighthouse is a must-visit monument when in Dwarka. It offers a breathtakingly beautiful 360-degree view of the Dwarka with the backdrop of sunset on the horizon. The scenic beauty of the landscape along with the occasional splashing of waves has a calming effect on your mind.

How to reach Dwarka?

Porbandar and Jamnagar are the nearest airports and are well-connected by roads with Dwarka. Apart from airways, this town is also well-connected with other major cities by railways and buses.